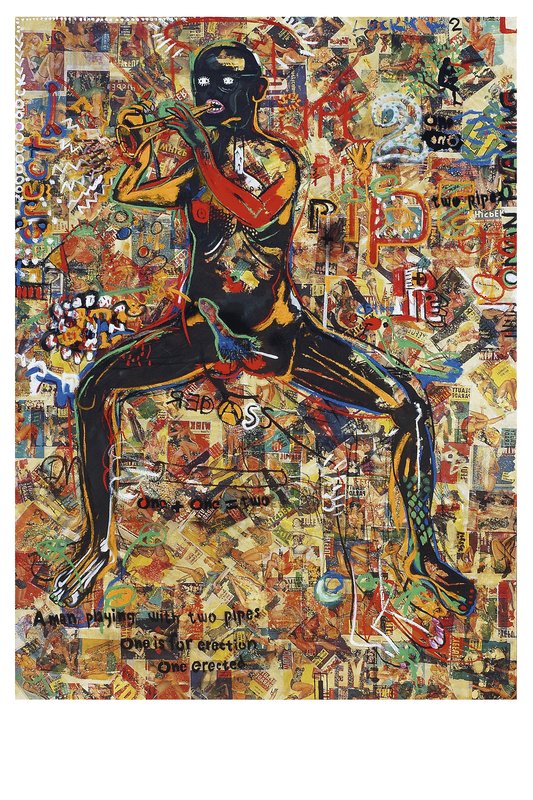 T. Venkanna comes across as an artist who is preoccupied with the idea of exploring newer possibilities in the representation of sexuality. He is discreet in this process and refuses adamantly to take recourse to the conventional imageries and motifs or to conceive loaded metaphors. On the contrary, with great consistency, he shapes his aesthetics, ideas and representational strategies in a peculiar manner where, he persistently locates them at the interstices of sexuality and the erotic. As a result, what is striking in the artworks exhibited in Sacred and Profane is how they foreground questions about both, the relationship between sex acts and sexuality and gender and sexuality.

Characteristically using the act of sexual intercourse as a trope, Venkanna constructs multiple compositional and pictorial strategies that have great aversion to beauty that is purely aesthetic. At one level, his artistic practice might seem to celebrate nudity and the blatant display of male and female genitals but at another level these imageries unabashedly meet the gaze of the viewer and relinquish his/her privileged position to gain immediate pleasure. Even the nude human bodies, studies in dark black outlines, are not perfect and pleasurable but appear raw, yet vulnerable. Devoid of any charm and far from being glamorous they are deliberately over-layered with texts, arrows, black spots and scratches; both to complicate and declaim the socially and culturally constructed notion of sexuality.

Via such visual devices, Venkanna relentlessly defies the notion of experiencing aesthetic pleasure; imparting uneasiness and discomfort to anyone who confronts his works. There is also a constant struggle by the artist to avoid the limited field of representation which is rooted in the ideas that place the heterosexual male phallus at the centre of sexuality, encompassing images designed to arouse the viewer. In the displayed works, Venkanna transcends the erotic to politicize the representation of sexuality, shaping it in varied and complex manners. The act of sexual intercourse emerges as a metaphor to address the subject of power and violence.

Mixed media serves as an apt tool for the artist to passionately engage with his characteristic style. Sketchy figures, flat forms, pasted newspaper, magazine cut-outs, and text - all dispersed unevenly over the painted surface enhance the tension deployed by the content. The colour black gains centrality to create a world that is no more solely concerned with personal desires and fantasies, but is inhabited with illicit sexuality and sexual violence, that is almost inaudible. On the contrary, attractive colour schemes mask the violence and power relation embedded in the bestiality of the wooden sculptures.

The presented body of works can be regarded as another phase in a quest that has preoccupied the artist since his student days. His formal training in painting and subsequently in printmaking left an impact in terms of the kinds of imagery and technique he employs. Venkanna locates his practice in interstitial spaces between sex-violence-desire-pain to engage with the larger content - sexuality.