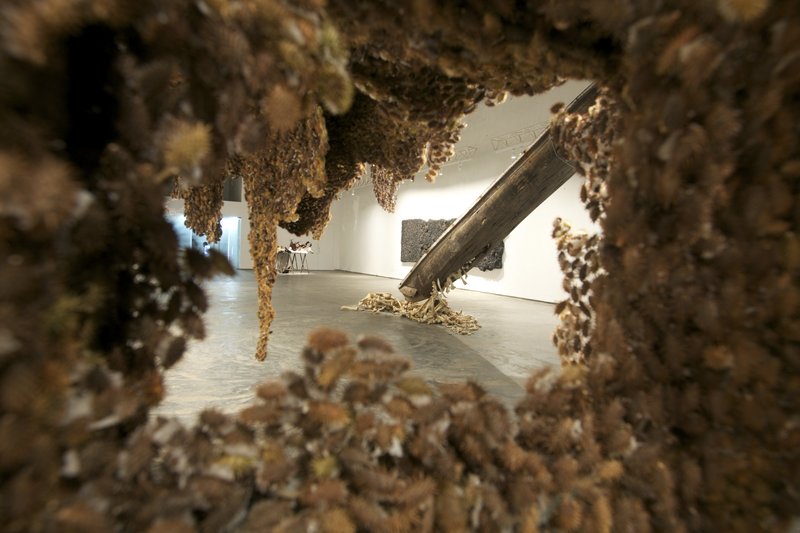 Shine Shivan’s new works are invested with characteristic elemental and primordial dynamism of which the material itself is the essence. Shivan works with a variety of commonplace and natural materials such as deer feces, chirchita seeds, animal bones, quail eggs, human hair, bird feathers, and thread. Through the juxtaposition of seemingly unrelated articles, he creates astonishing imagery and poem-objects, as compelling as the chance encounter of quail eggs on a babul tree. These works do not rely exclusively on the crutches of externally generated meaning and by their very nature typify unconscious creative forces.

The dominant themes of fluid gender roles and the quest for the marvelous are evident in the works, which are semi-autobiographical in nature. In Cock Dump, the taxidermal cocks used as a symbol of masculinity are arranged in an orgiastic frenzy. They seem to say, “We question society’s attempt to inscribe us with a specific sexual role. We love freedom to love.”

Shivan’s work makes palpable the inherent tensions between seduction and repulsion. In Sex Fumes, deer droppings dominate rather than decorate the wall. Inviting viewers to examine the work up close, only to discover that far from being a barrier, the uncompromising presence of excrement is a means of communication. Its sheer rawness asserts an inner quality more significant than anything that could be cast or molded.

In works like Nightfall, the chirchita seeds used as raw material, like most other organic material he employs, are in an endless process of becoming rather than being. Art that naturally works on itself, ever changing form in order to become a new object, contains implicitly its own subtle protest against commoditization and any sort of mass-production.

Shivan uses a highly personal and innovative artistic language. In The Passage, the structure is precariously positioned like a vertical gash slicing into the cavernous space of the gallery - evocative of the transient space between being, non-being and coming into being. This imaginative quality with its images born of dreams, daydreams, subliminal perceptions and psychological drama, exists in a shadowy realm of its own, exuding the visual and palpable presence of forces of nature, provoking greater thought than the usual still life. Shivan’s art approaches the surreal in its use of unexpected juxtapositions, its revolt against rationality and mundane function, and its assault on the conventional ways in which people see and think.