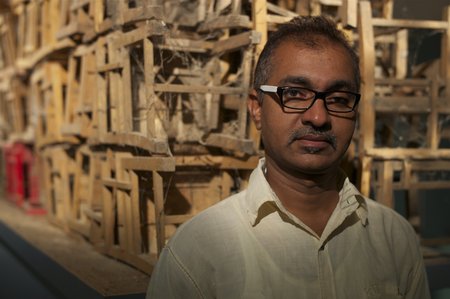 Mansoor Ali was born in 1978, Jasmatpur (Gujarat, India) and completed his Masters in Fine Arts (Sculpture) from the Faculty of Fine Arts, M.S. University of Baroda in 2004 and Bachelors in Fine Arts in 2002 from the same institution. His works were previously seen at the Durbar Hall Art Center, Ernakulum, Kochi (2008), Faculty of Fine Arts (2008), Gallery Maskara (2008), Sandarbh Artist Residency - Partapur, Rajasthan (2007). His works are in important collections in India and abroad including the Charles Saatchi collection. He was one of the featured artists in the Saatchi Gallery show ˜The Empire Strikes Back: Indian Art Today' (January-May 2010). In November 2010 his work was part of an exhibition at Artissima 17 (Art Fair), Turin, Italy. In 2011, his works were exhibited as part of group shows at Gallery Maskara, Mumbai, India and the India Art Summit (India Art Fair), New Delhi, India. The artist lives and works between Baroda and New Delhi.