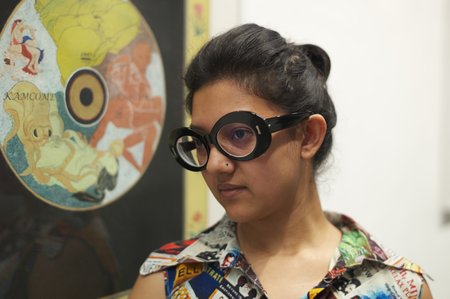 Meenakshi Sengupta was born in 1987, Kolkota, India and holds a B.V.A. 2011 (Painting), from the University of Calcutta, Kolkata, India and a M.F.A. 2013 (Painting) with distinction (Gold Medal), from the Maharaja Sayajirao University, Baroda, India. In her work, Sengupta uses traditional pictorial representation to push formal and aesthetic conventions producing new meaning. Using wit and irony she explores gender relationships in contemporary life. In 2010, Sengupta's work was shown at the Gen-Next at Aakriti Gallery, Kolkota, India and the Annual Exhibitions of the Camlin Art Foundation and the Academy of Fine Arts, Kolkata, India. In 2011-2012 her work was part of group shows at Studio 21 and La Mere, Kolkota, India and Nandan Gallery, Santiniketan as well as the Mumbai Gallery Weekend, Mumbai, India. In 2013, she will have her solo debut at Gallery Maskara, Mumbai, India.