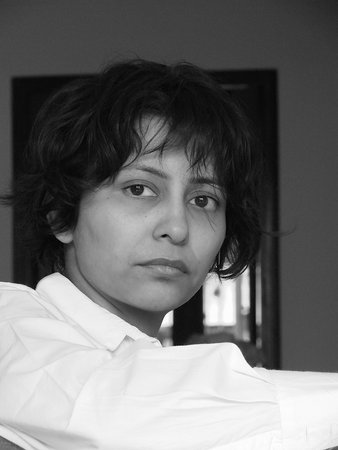 Priyanka Choudhary was born in 1976, Delhi, India and holds a Bachelor of Fine Art from Delhi College of Art, Delhi, India. Her visual vocabulary spans Arte-Povera, Minimalism and contemporary practice including performance art.

In 2015 Priyanka started with a performnce at the India Art Fair, New Delhi, India. In 2014 she had her third solo show 1914 – 2014 at Gallery Maskara, Mumbai, India. In 2013, the artist performed in five major conflict zones in four different continents. She was artist-in-residence at the prestigious Nirox Residency, Cradle of Humankind, Krugersdorp, South Africa. She was also awarded a month long residency at [R.A.T.] Residencias Artísticas por Intercambio, Mexico City culminating in a show at the same venue. Her third solo show Charkha was mounted at Yam gallery, Mexico City and she was one of the featured artist in Traditions\Transformation curated by Abhay Maskara at Geukens & De Vil, Antwerp, Belgium. Her works were shown at the Skoda prize show at National Gallery of Modern Art (NGMA), New Delhi, India; In 2012, Choudhary participated in two group shows at Vadehra Art Gallery, New Delhi including a performance Shroud Reader at the same venue. Her works were featured at the India Art Fair, New Delhi, VIP Art Fair (online) and she was one of 20 artists shortlisted for the ŠKODA Prize; In 2011 she had her second solo show Tetanus Midas at Gallery Maskara, Mumbai. Her works were also featured in (M)other India at Galerie du Jour – Agnès B, Paris, France and at the India Art Summit, New Delhi, India; In 2010, her first solo show, NUL to Now was curated by Abhay Maskara and was held at Gallery Maskara, Mumbai, India. The artist lives and works in Delhi, India.