Anatomy of an Unknown Chair 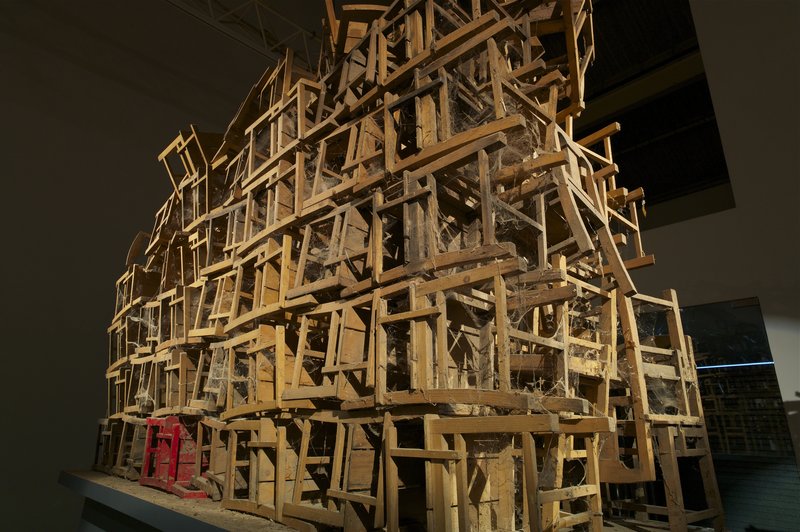 Artist Mansoor Ali has long used chairs as a commentary on the Indian political system. By altering their usual configuration, proportion and context, the artist creates sculptures that are open to various interpretations. In previous works - such as Dance of Democracy 2008, Ali stacked 'sarkari' chairs one on top of the other in a pyramidal tower, superficially stable but prone to crumbling like a house of cards.

In this, his debut, Ali calls attention to the various facets of power politics prevalent in our country. For instance, in larger-than-life work such as A Restless Chair, the viewer is confronted with a seat that is constantly in motion and rotates faster as you approach it - as if resisting the possibility of being occupied. The chair stands on four interconnected legs sculpted to represent the major faiths prevalent in our country - a symbol of unity in diversity.

Monument to an Unknown Politician stands an imposing 102-inches tall. Made entirely in steel, the central column supports seven chairs of various dimensions - ranging from 3 to 84 inches. To reach the highest chair, you have to climb the little ones and the ascension from small to big is suggestive of the hunger for power in the field of political gamesmanship. Tethered to it’s own axis, the big chair moves in a circle, but is going nowhere.

In Weight of the Political Brain, an industrial weighing scale forms the seat of an oversized chair that is fashioned in acrylic and steel. A miniature version of the parliament house rests on the seat. The overhead digital display reveals the weight of this political nerve center to equal that of an average human brain. The work seems to question in whom we put absolute faith.