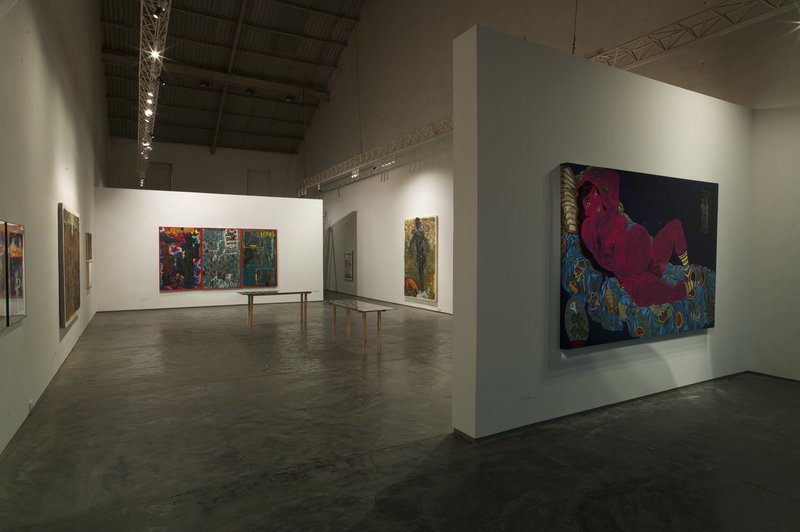 Constantly immediate and with raw openness, T. Venkanna creates new art for a new world. His storytelling takes various forms through constellations of images, collage, pastiche, the recourse to allegory, metaphor - all ways of thinking-in-pictures, from which understanding emerges without having to be expounded.

In the oil on canvas - Celebration, the figures around a central bed engage in an orgiastic, bestial frenzy. They appear estranged from their own bodies and universal essence. The bed - a metaphor for a sacred, spiritual space - lies empty, typifying the void and questions what we truly are celebrating. Living Sculpture takes the notion of spiritual homelessness further, where the idea of home is a robotic experience, and the protagonist is in bed with his leg around a blow-up doll. The image examines contemporary challenges to social cohesion, inviting reflection on states of psychological isolation and emotional poverty.

As antidote to alienation and a pre-requisite for the emergence of a truly human society, is the artist’s persistent hope for love. In Love Life I and II, same-sex couples celebrate their connection in a playful manifestation of non-reproductive sexuality. Here the will to freedom is given pleasurable rein, and sexual experiments unfurl - celebrating aspects of life that a ‘rational’ society might like to conceal.

Confounding further those who prize the ‘logical’, Venkanna collapses the boundary between male and female, in the portrayal of his multifaceted, pregnant hermaphrodite in Evolution. Through this new creation, he asks if fixed notions of gender are desirable or even tenable; underlining the notion that gender is a man-made category of knowledge, as opposed to an inherent reality. Adam and Eve in the distance, represent the heterosexual, ideological majority. In foregrounding the hermaphrodite, an apparently-stable hierarchy is challenged, establishing that forces that counter the normative, have the ability to be as flexible, plural and hybrid as power itself.

The potency of Venkanna’s art lies in how he transforms the wolves of his spontaneity into the shepherds of knowledge and beauty; revealing the world in ways we have always known, but scarcely have the courage to admit.