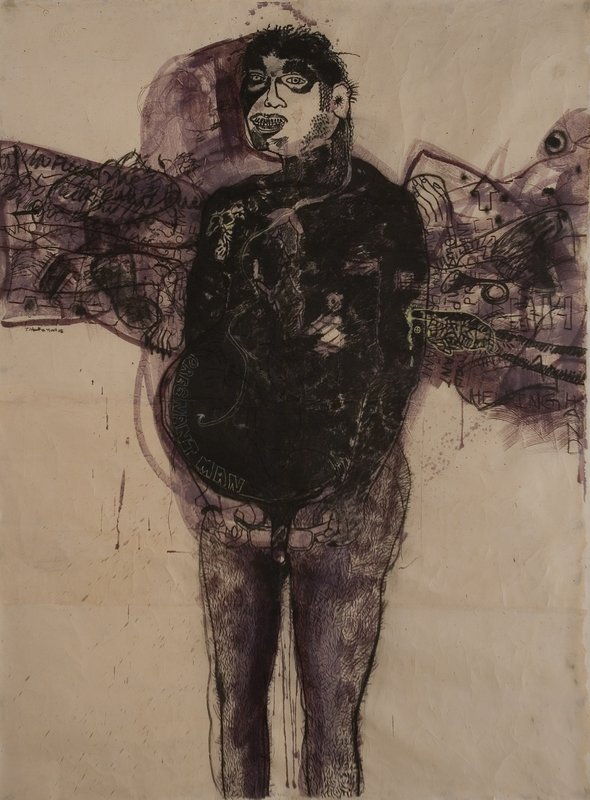 A maiden glance at T. Venkanna’s works leaves the viewer perplexed and baffled. Such a feeling arises primarily, owing to the fact that, he effortlessly oscillates between the two dominant pictorial modes, the aggressive and the lyrical, which in art historical/critical language have come to connote masculine and feminine.

By the time, one comes to terms with this aspect of Venkanna’s works; one feels once more ‘deceived’, by the fact that, the artist thwarts any desire on the part of the viewer to understand the works by reducing them to one single meaning. Even though the works, primarily, revolve around the subject of sexual imagination, sexual fantasy and the perpetual, unbounded desire for such pleasure, they also, subtly question the socially constructed notions about masculinity. The artist plods the blurred line between voyeurism and the hidden fantasies of the male. To fully identify with this observation one has to engage with the multiple pictorial tactics he employs in his works.

In fact, by means of the labyrinthine character of his pictorial world, he does not accommodate the viewers or grant them an easy condition to consume his works. The camouflaged surfaces map the massive detour of our sexual fantasies and the desire to escape the constraints of a repressive society. For instance, the installation consisting of a small and a big crown has no functional value. Yet it traps the onlooker’s imagination by its sheer scale and materiality. It is here that the relevance of his work is exemplified; an attempt to locate and (re)present sexuality outside the ambit of hegemonic contention, and to problematize the structure of power operating through representation itself.