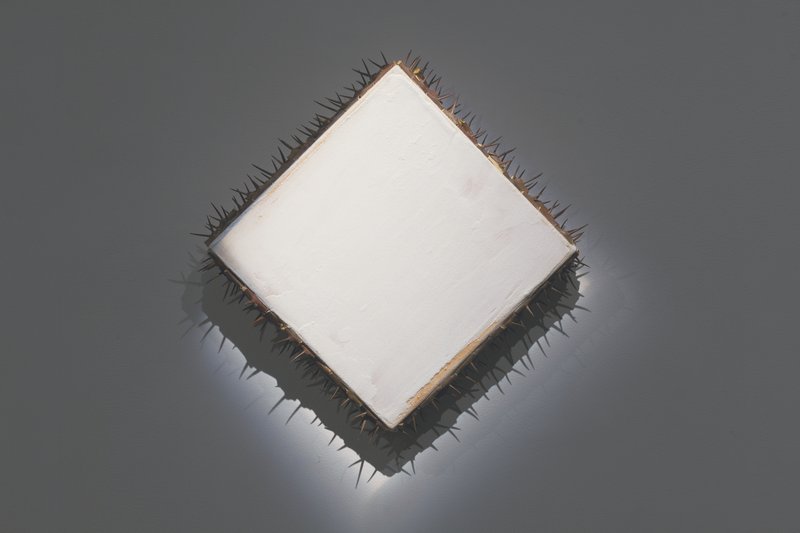 What began in Dusseldorf and quickly developed as one of the most significant avant-garde art movements of the 20th century finds a new take in Delhi based Priyanka Choudhary. Her works unwittingly echo the concerns first voiced by German artists Otto Piene and Heinz Mack, who formed the ‘Zero Group’ in 1956 and were joined later by Günther Uecker.

Square surfaces that appear monochromatic and textureless reveal upon closer examination small holes, needles, bulges, and patterns. Many of the canvases are cut and slashed as if calling attention to the poetic violence of modern life. This act of putting knife to canvas is reminiscent of Italian painter and sculptor Lucio Fontana, an ardent supporter and member of ‘Zero’. In 1958 Fontana created his most famous series, Concetti Spaziali - Attesa, where he cut through the canvas to create an actual dimension of space. Half a century later, this action is just as spontaneous yet controlled in Priyanka’s hands.

Her work is anchored by natural material such as thorns, dried twigs and branches. She rarely uses paint choosing plaster and red clay instead. Interspersed with the surface, the push-and- pull of material characterizes the energy of the canvas. In one work Priyanka has planted thorns around the edges of a heavily textured ‘diamond’ as if in homage to Das gelbe Bild (1957-58) by Uecker. In another work, dried branches thrust into the viewer's space with distinctly menacing force. The result of these bold gestures is to draw the viewer to experience the work with unpredictable emotion.

Line and shadow play is an integral part in Priyanka’s visual vocabulary. Highlighted by the stack of logs against a stark white wall, this highly charged assemblage is set in contrast with the wall opposite that holds the smaller format works. They seem to rest unceremoniously until the viewer is confronted by these relief sculptures riddled with nails. Is this act of violent hammering some sort of protest by the artist?

The answer to this question may lie in the installation titled Pubic. Set against the far end of the gallery and encompassing the entire back wall. The 2x2 grid pattern formed by the bamboo scaffolding creates a symmetry that is at once overpowered by hundreds of harpoon-like protrusions. “Abstraction retains the expressive content in my work,” says the artist. “Structures are pubic. Their vertical emptiness is awkward, confused, ugly and beautiful at the same time. My personal anxiety is pubic. It is a conflict between the rational and the emotional.”