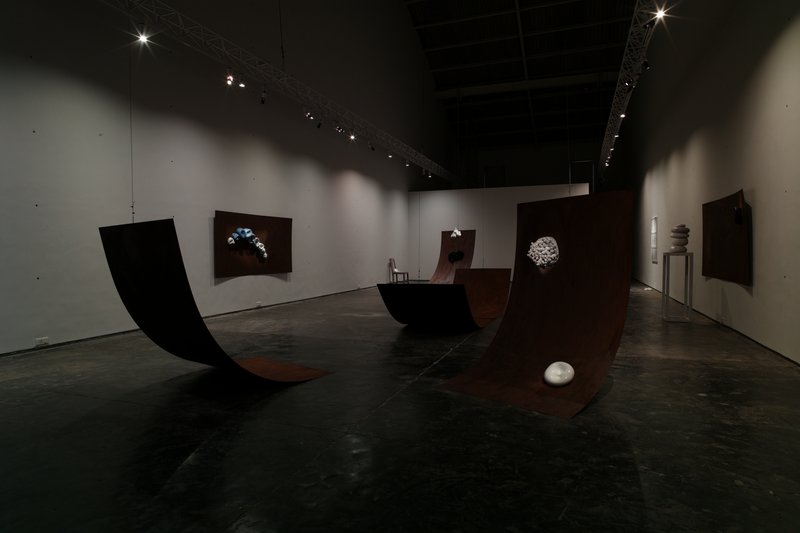 In this fourth solo show at Gallery Maskara, artist Priyanka Choudhary draws from her 2013-2014 experience of performing in five major conflict zones in four different continents. In these new works, the touch of the performance has become the touch of porcelain, and the physical experience of the body has been transformed into drawings on paper and action-sculptures in porcelain.

“Throwing clay on a wheel - is like bringing life to the inanimate. It suddenly has a voice, or even a song - that can be heard in the random lyrical formation after a throw. This first throw is birth. The second throw distorts the seemingly perfect form and, to put it most simply, represents life.

All the works in this series, were thrown first on the wheel, dried for a few days and then dropped in a still-soft-state to the ground, from varying heights. Like being born, first thrown out of the womb; and then repeatedly thrown from different levels of life.

The first throw makes an object, a shape, a space that can be filled, utilised even fetishized. The second throw brings out the real voice of the pot, eliminating the use of it. The third, fourth, fifth throws dissolve the form back into an amorphous state. From the birth of the pot, we ultimately arrive at its truly perfect form - death.

The second throw is what I have explored in the past two years. Implosions of moments, of memories, of performances where, in a sense, I was the clod.” - Priyanka Choudhary