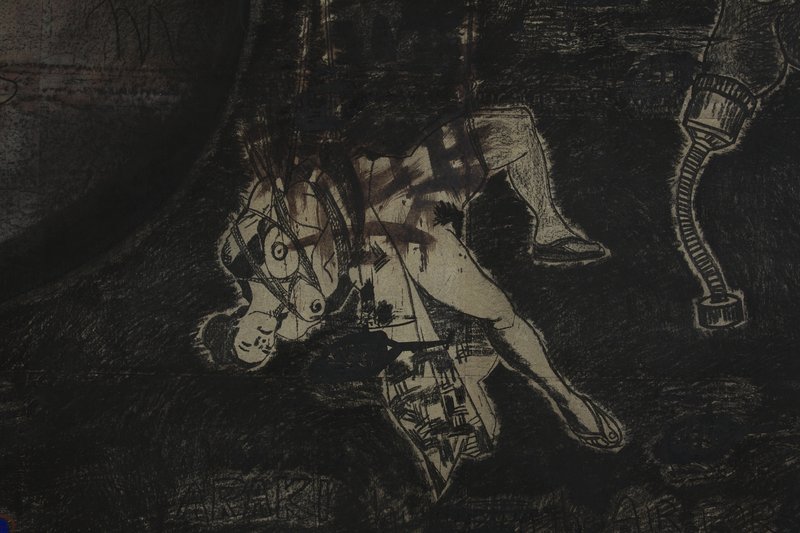 T. Venkanna’s “Pancha Mahabhuta” takes each of the five elements – Earth, Sky, Air, Fire and Water and catalogues ways of seeing them through varied representation. The delicate fragments that detail each work include - archetypes, dreams, sexual fantasy, references from art history and primordial images, that make up the collective unconscious. In most cases, the signs and signifiers used are extracted from their established systems of meaning and employed as objects re-imagined to elaborate on the human condition - both psychological and political.

At first glance, the works may appear to be a comment on war, an examination of environmental degradation, a critique of the shallowness of society and an appraisal of human beings estranged from their own bodies, nature and essence. In works such as Earth, images from Goya’s Disasters of War, are interspersed with soldiers fighting on behalf of nations hungry for power. Further afield, a demonic avatar of Adam and Eve lust over a larger-than-life apple, projecting the birth of greed and notions of excess. But upon closer scrutiny of the canvas, a fuller reading gradually emerges. Hands nurturing a sapling carve out a path of hope driven by spirituality and intellect, and seem to state, “We don’t exist in ourselves but with and for others.”

In Water, an octopus pleasuring a woman recalls Japanese artist Hokusai’s erotic woodcut - The Dream of the Fisherman’s Wife. At the bottom left of the panel, we see a boatman at sea drinking urine from a woman standing. Never judgmental and ever playful, these sexual acts are not depicted as aberrations or indications of inherent depravity, but part of a broad continuum of human sexual behaviour. War on the other hand, especially when seen as part of the larger picture drawn by Venkanna, reveals itself as meaningless and futile. In Fire, while a house is burning down, nothing appears to matter as much as the burning desire for human connection, depicted through an oblivious couple locked in loving embrace. A

ll these contradictions are loosely juxtaposed as part of Venkanna’s free association on canvas. In his worldview as an artist, he offers no particular hierarchy to any representation, but articulates the difference between life and loss as it is, rather than as it should be. For the artist, philosophical self-awareness and self-reflection are key antidotes to prejudice, intolerance and the irrational exploitation of the five elements.